Imagine a system of taxation where only the rich contribute, while middle and lower class citizens don’t have to pay any taxes. On top of that, imagine that in this system, the rich love to pay their taxes and they sometimes compete who’s going to pay more!

Sounds crazy? The monument of Lysicratres in Athens, stands as a solid proof that this crazy idea was once a reality! It was erected by a very wealthy citizen of Athens (Lysicrates) 24 centuries ago and he was a sponsor of musical performances at the theater of Dionysus. One of those performances got him the award of first prize.

The way citizens were taxed in ancient Athens was genius! Whenever Athens was in need of cash, the state didn’t have to draw funds from the public treasury. The rich were called upon and they acted as sponsors. This is what the Athenians called ‘choregia’ or as we know it today: sponsorship.

This financial contribution rather than being enforced by the state it was seen as a voluntary gesture that showed that rich citizens did care about their fellow citizens. It showed that the rich were true citizens (polites) and not private citizens (idiotes). And that’s the level of awesomeness that the Athenian democracy reached. 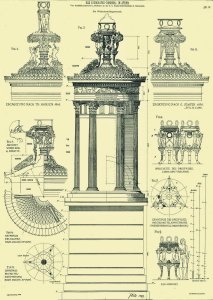