As far back in time as 632 BC, an athlete tried to establish a tyranny in Athens. His name was Kylon. An ambitious Olympic Victor that came really close to taking over absolute power so as to Make Athens Great Again. For many, Kylon was just some guy… He wasn’t a member of the royal family his actions were not ‘dictated’ by some God. He wasn’t even some high-ranking officer of the army.

But he was armed with burning ambition, a group of dedicated friends, a few good ‘connections’ (the ruler of the neighboring city of Megara, Theagenes, happened to be his father in law) and decided to seize power. Why? As absurd as it may sound, the answer is: why not?? The amazing thing was that this is one of the earliest examples of someone trying to be #1, not because he is chosen by the gods or because he inherited this right by his king-father. He was trying, just because he could!

Bear in mind that  the word ‘tyrant’ didn’t actually mean a ruler that brutally exercised absolute power. Today, when we hear of a tyrant, we think of an autocrat, unrestrained by law or constitution.

In 6th century BC Greece, things were different: for a citizen of a Greek city-state, a tyrant was someone that took control of power by the use of force, without possessing any legitimate rights. He was then judged according to his deeds and the good he did to his city. So, there could be good tyrants and bad tyrants.

What’s really unique here, is that a former nobody, could now be somebody!

From the Pharaohs of Egypt and the Great Kings of Persia, to the Mycenaean monarchs and Jewish chieftains, most rulers were ‘God sent’ chosen by some god or/and they were members of some elite social cast, like, a royal family. Most rulers up until then claimed  direct descendant from some god. Either that or God personally chose them to rule over their subjects. Strangely enough (or naturally enough, if you prefer) most societies accepted this claim as almost self-evident, accepting at the same time the rule of that ‘divine’ monarch. We can see why the ‘tyrant phenomenon’ in archaic Greece was so unique and introduced new ground-breaking ideas about politics to the masses.

Kylon inspired to become a tyrant of Athens.

Unfortunately for Kylon his attempt failed. Lack of popular support followed by the violent reaction of his opponents led to the total failure of Kylon’s plan, himself barely escaping. What followed next was notoriously terrible as Kylon’s followers where all put to death! Even though they were promised safe conduct, in the end they were all executed. This savage act was so brutal that it was limiting blasphemy and it became known as ‘Kylonion Agos’ (the word ‘agos’ having a meaning of an impious crime of sacrilege and desecration)  it felt as if a curse sent by the gods, fell upon the city.

Recent excavations near the south coast of Athens (at Faliron) have unearthed mass burials of around 80 men that were executed. There is a good chance that these poor men, can be followers of Kylon. All the victims are of relatively young age, they all appear to have been in good health when put to death and the most chilling detail is that all their hands were tied up.

We have to be very careful jumping into conclusions here, as the same area of Faliron, is known since the beginning of the 20th century for being rich in different burials of people that were executed in different horrible ways, most of them using the method of ‘apotympanismos’. Those condemned, were chained on a wooden plank and were left to die there exposed to the elements (much like what the Romans used to do later when they used crucifixion as a method of execution). That’s the way that the city of Athens executed criminals and those skeletons that were excavated back in 1920s by Greek archaeologists Kourouniotis and Pelekidis. Those executed may have been pirates and according to a well-documented study by professor Keramopoulos that was published in 1923, execution by chaining on a wooden board was relatively common from the 7th c. BC till the 4th c. BC

We have to wait for the forensic examination of the human remains unearthed at Faliron. This data, combined with the study of different findings that were excavated and the re-reading of ancient sources, will give us a clearer picture of the twilight of the Athenian Democracy. 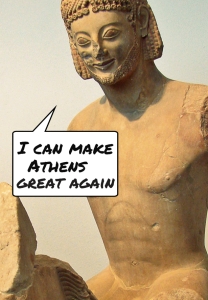