Our democracies today are representative. We elect politicians, politicians govern us. In Ancient Athens, you were ruling yourself.

Participation was seen as a fundamental element of Democracy. Athenians that behaved as ‘private citizens’ were seen through a negative eye and actually the Greek word for private citizen is “idiotes”, which is where the word ‘idiot’ comes from!

Plato wrote that ‘one of the penalties for refusing to participate in politics is that you end up being governed by your inferiors.’

It was a direct, in-your-face democracy.

So, what affected the vote of a citizen, really mattered… 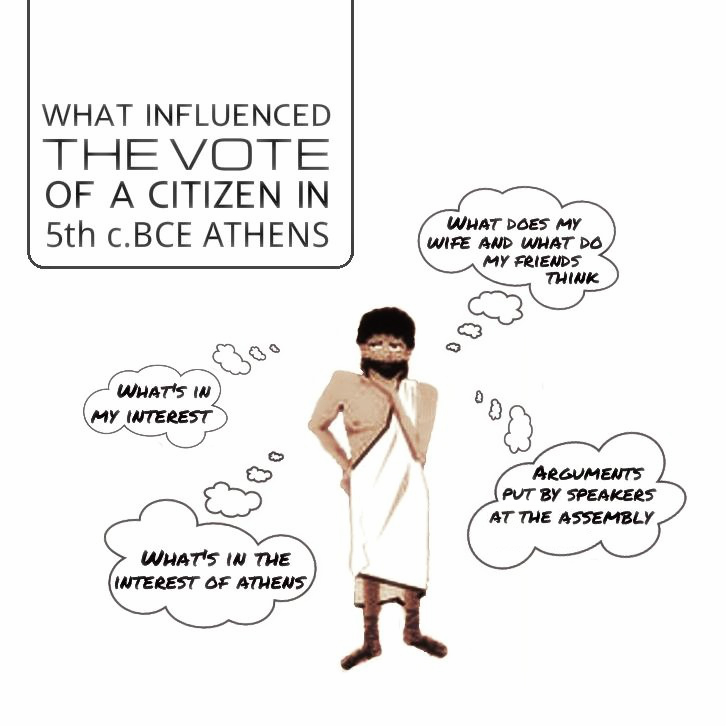 Have you ever wondered where does the word ‘museum’ come from? No? Ok… I’ll tell you anyway: It’s connected with the Muses! The Nine Muses were deities who ruled over the arts and sciences and gave humans the necessary inspiration for creation.

According to Hesiod, Zeus slept with the young and beautiful Mnemosyne. Mnemosyne (the Greek word for ‘memory’) held a special importance in ancient times, when there were still no written records and manuscripts, so poets had to carry their work in their memory.

The offspring of the love affair between Zeus and Mnemosyne? The Nine Muses. God Apollo took them under his protection and when the Muses grew up they showed their tendency to the Arts. An epithet of Apollo was ‘Mousagetes’, meaning ‘leading the Muses’ and those young deities soon decided to dedicate their lives to the Arts:

Ancient writers, as early as Homer, appeal to the Muses at the beginning of their work. Homer appeals to the Muses both in the Iliad and Odyssey and until today, the Muses are symbols of inspiration and artistic creation. In the Ancient Graeco-Roman world, authors, statesmen, artists, philosophers they all believed they were successful because one or more of the nine Muses were guiding them.

Every learning institute with respect for itself had an altar to honor the Muses. The Ptolemies in Egypt dedicated the famous Library of Alexandria to the Muses. The word “museum” literally means a shrine dedicated to the Muses and you must have guessed by now the origins of the word “music”, too.
In modern times we tend to call someone who inspires an artist “a muse”!

Their conversation ended abruptly after Euthyphro felt a bit cornered and found an excuse to leave Socrates with the promise to finish their discussion some other time. Well… Can you blame him? It’s not just that Socrates wouldn’t let go easily… It’s also that the challenge Euthyphro was facing was a difficult one and remains so up until today.

Socrates asks Euthyphro whether something is moral because God commands it, or does God command it because it is moral? This simple question of Socrates has exercised tremendous influence in the history and study of morality.

The Euthyphro dilemma is technically an argument against the divine command theory, aimed at disproving God’s existence by raising an issue of morality. This isn’t of course explicitly declared by Socrates but I’m sure people like Epicurus would smile and nod when reading this part of the book. On the other hand, some religious people reject it as a ‘false dichotomy’ (google that) but this is actually up until today a persisting problem which also applies to meta-ethics.

Relax… We’re not going to embark on this now. I’m going to focus on an interesting detail that is somewhat irrelevant: the place that this conversation took place. Would you believe that we can pinpoint today the spot that Socrates was hanging out when he met Euthyphro?

Let’s see how the dialogue starts…

Euthyphro: Why have you left the Lyceum, Socrates? and what are you doing in the Royal Stoa? Surely you cannot be concerned in a suit before the King Archon, like myself?

Socrates: Not in a suit, Euthyphro; impeachment is the word which the Athenians use.

Euthyphro: What! I suppose that someone has been prosecuting you, for I cannot believe that you are the prosecutor of another.

Euthyphro: Then someone else has been prosecuting you?

Euthyphro: And who is he?

Socrates: A young man who is little known, Euthyphro; and I hardly know him: his name is Meletus, and he is of the deme of Pitthis. Perhaps you may remember his appearance; he has a beak, and long straight hair, and a beard which is ill grown.

Euthyphro: No, I do not remember him, Socrates. But what is the charge which he brings against you?

The conversation goes on. So, as we read, this dialogue takes place just outside the ‘Royal Stoa’ (Basileios Stoa). Guess what. -This stoa was excavated by American archaeologists and the traces of the building are there today! The first steps of the stoa have been unearthed.

Few passers-by today notice that quiet corner next to the busy Adrianou street but -unknowingly- countless people have had their drinks next to those same steps that Socrates was sitting, waiting for his turn outside the Royal Stoa.